At over 15km in length from start to finish, doing the entire Waihopai Walkway would take the better part of the day to walk completely or about a couple of hours to bike. In fact, doing the entire loop can almost take you the entire length of Invercargill and back!

There is plenty to see along the way including a lot of natural Southland landscapes. It’s an excellent way to get a real feel for Invercargill and the variety we have here in the south. The Waihopai Walkway also links to the “Invercargill to Bluff” part of the Te Araroa Trail–the 3000km nationwide trail system from Bluff to Cape Reinga–although some of the path to Bluff is currently along the highway.

The Waihopai Walkway functions both as a walkway and a cycle path for the majority of the trail. A large portion of it goes alongside the Waihopai River or through natural bush. To do the entire trail there are a few intersections to cross, with Longford Rd/Victor Ave near the airport being one of the busiest ones. There are also a couple of bridges over the river to walk across.

There are several entrance and exit points along the trail. See “Getting there” at the end of this article for more information about these different points and to decide which ones would be best for you.

While there are many memorable places on the walkway, there are a few highlights that many people enjoy.

At the south end of the trail is the Estuary Walkway. It’s a wooden boardwalk that goes over the water for about half a kilometre give or take. Much of the walkway has water on sides where wildlife can often be found. This area is also a popular gathering point of birds like black swans.

Since the trail is a 15km loop, there are several places where you can park depending on what part of the trail you want to experience.

As one of the more popular spots of the walkway, the Estuary Boardwalk has a couple of places to park near it. The main road to Bluff, Bluff Highway has a wide parking lane on the side of the road when heading south. You can park it any of these spots and walk across the street to the boardwalk.

There is also a dedicated parking area for the walkway you can reach by going down Bond St past the Invercargill Transfer Station.

Other access points include Stead Street and North Road. 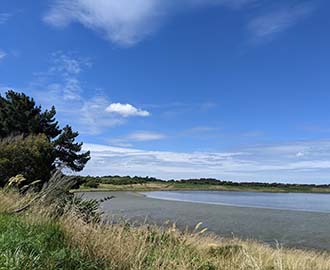